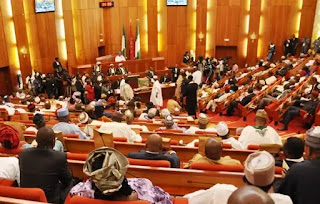 The Senate has directed its Committee on Education (Basic and Secondary) to interact with the Minister of Education to identify the causes of the recurring failure in the WAEC results with a view to finding remedies.
The resolution followed the adoption of a motion sponsored by Umaru Kurfi (Katsina Central), who described the recurring mass failure of West African Examination Council (WAEC) results in the country since 2009 as embarrassing.
The senator expressed worry that the rate of failure remains high, saying it was prejudicial to the interest of Nigerian secondary school students and their parents.
According to him, in both 2009 and 2010 WAEC, only 25.99 and 24.94 per cent respectively passed with five credits including Mathematics and English, while the remaining others constituting 70 per cent failed.
“In 2011 May/June WAEC, only 86,612 out of the 1,540,250 candidates that participated in the examinations got credit in mathematics and English language.
“Also in 2011 May/June WAEC, only 86,612 out of 1,540,250 candidates that participated in the examinations got credits in Mathematics and English Language.
“In 2012 May/June WAEC, only 649,159 out of 1,672,224 candidates that wrote the examinations which represents just 38.81 per cent got 5 credits and above including in the core subjects of Mathematics and English language.
“In 2013 WAEC, only 29.17 per cent candidates actually passed the Nov/Dec WAEC examinations while 70 per cent failed.
“In both 2017 and 2018 recent January/February private examinations, only 26.01 per cent and 17.13 per cent candidates have passed with 5 credits including Mathematics and English language respectively, while the remaining over 70 per cent candidates failed,’’ he said.
Mr Kurfi regretted that the future of the country would continue to be bleak if urgent action were not taken to address the situation.
Contributing, Barau Jibrin said urgent steps must be taken to find reasons for the failure and remedies.
Emmanuel Paulker said the situation called for a grave concern, attributing the development to the problem from poor quality of education received at the primary school level.
“And it is this same crop of students that will move to the secondary school. Some of them can hardly write or read; without a foundation, there is no way a house can stand.


“Those formulating our school curriculum must sit up, if not, we have our future doomed,’’ Paulker said.
On her part, Biodun Olujimi emphasised the need to evaluate the entire value chain in the education sector, saying, “There is need for revaluation to understand where the missing link is.
“There is also the need to look at teacher education because we have some teachers who are not properly trained, who don’t do research and cannot read or write.
“So, how can they teach our children well,’’ Ms. Olujimi said.
In his remark, the President of the Senate, Bukola Saraki stressed the need to increase the value of human resources to promote quality education in the country.
“I am sure the committee will work assiduously to get to the bottom of this matter and see that it is addressed.
“Indeed the education sector need some reforms,’’ Mr Saraki said. (NAN)